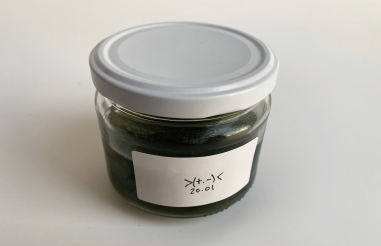 “When ultraviolet light acts on a mixture of water, carbon dioxide, and ammonia, a vast variety of organic substances are made, including sugars and some of the materials from which proteins are built up. In the present world, such substances are destroyed by microorganisms.

But before the origins of life they must have accumulated till the primitive oceans reached the consistency of hot dilute soup. Today an organism must trust to luck, skill, or strength to obtain its food. The first precursors of life found food available in considerable quantities, and had no competitors in the struggle for existence.”
J.B.S. Haldane, The Origin of Life, 1929

What are the origins of life?

LillyJars contain approximately 200 ml of algal bio-ink made with living algal biomass produced into our photobioreactors. They are the core of a larger process that begins with the cultivation of blue-green algae in the WaterLillies, and ends up in the creation of algal drawings (PaperLillies). The entire process is a celebration of human ingenuity and the claim for a collaborative design practice in which humans and nature celebrate a love affair, instead of practising a suicide design strategy in which humans try unsuccessfully to overcome nature.

They are a trigger to propose creative uses of algal biomass.
They propose a speculation on the brevity of human path compared to that of life on Earth.
They contain something very similar to the Primordial Soup where it all began.

In 1929 British scientist J. B. S. Haldane wrote a paper called “The Origins of Life” where he describes a very convincing hypothesis on the bio-chemical origins of life on Planet Earth approximately 4 Billions years ago. Haldane was a passionate scholar that in his late life  moved to India so that he could stop wearing socks, become vegetarian and study Hinduism as a form of practice of freedom. During his previous life as an academic in Oxford, in 1929 when he was in his mid thirties, one of his most successful achievements was the introduction of the Primordial Soup Theory. Haldane’ envisioned the Oceans of a young Planet Earth as a quite dense water based solution in which inorganic chemical compounds coming from outer space during the formation of the planet began to react together under the influence of solar light and heating to give birth to early organic compounds, RNA molecules and finally DNA and the first living cells.

In 1924, 30 years old soviet biochemist Alexander Oparin independently developed a similar theory based on the idea of a dense liquid ocean as the cradle of a series of chemical transformations that eventually created the first living cells from carbonated mud. He manages to demonstrate how  the ancient cosmogonic ideas on spontaneous generation of life from non-living matter can be scientifically consistent.

Both theories are strongly speculative, but very fascinating and rely as the basis of all contemporary ideas on the origins of life. The fact that more complex forms of life derive from simpler original organisms seems easy to understand today, and we don’t have big troubles in thinking that humans derive from apes, and that at the very beginning of the chain we find mono-cellular algae.

The LillyJars address the archaic question about the origins of life. Every jar contains a bit of something very similar to Haldane’s and Oparin’s descriptions of the Primordial Soup. It’s a living matter that has been on the planet much much longer than humans. Billions of years versus only a few tens of thousands years. It’s an evidence of how nature is much stronger than us. It’s an evidence of how saying that humans are destroying the planet is an anthropocentric and arrogant statement. What humans are really pursuing is the suicide mission of destroying the conditions for them to stay here longer.