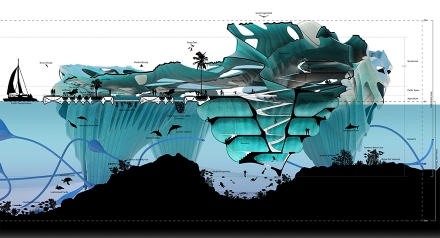 The Lillies land in America next October! They will be presented at Acadia 2015 in Cincinnati Ohio in the Curated Projects Section of the exhibit COMPUTATIONAL ECOLOGIES, DESIGN IN THE ANTHROPOCENE (curators Chris Perry and Lonn Combs).

Until recently, architecture’s proximity to environmental issues has been dominated principally by “sustainability” or “green” discourse, which not unlike the “functionalism” rhetoric of twentieth century modernism, privileges an arguably deterministic and thus parochial view of the discipline. The ACADIA 2015 conference, titled Computational Ecologies: Design in the Anthropocene, seeks to expand the topic of environmental discourse beyond purely practical issues of “performance” as a general means of engaging experimental contemporary design that explores aesthetic, conceptual, and even philosophical levels as well. In the context of such work, the discipline of architecture, conceived as both a technological and a cultural endeavor, becomes immersed in a much broader geophilosophical debate regarding the future of society and by extension the built environment in the age of the Anthropocene. The currated projects exhibition expands on the topic whicle featuring recent work bycero 9, Stefan Behnisch, NADAAA, New Territories, Philippe Rahm, allthatissolid , CASE, CODA, EASTON+COMBS, ENDEMIC, form-ula, Geofutures, Cesare Griffa,HANNAH, Ciro Najle + Lluis Ortega, pneumastudio, and Terreform ONE. This exhibition will take place at 21c Museum Hotel.